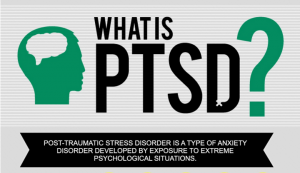 Learn a little about PTSD today. Then learn about Trauma

PTSD (posttraumatic stress disorder) is a mental health problem that some people develop after experiencing or witnessing a life-threatening event, like combat, a natural disaster, a car accident, or sexual assault. There are currently about 8 million people in the United States with PTSD. U.S. Department of Veterans Affairs – National Center For PTSD

Who Develops PTSD?
Anyone can develop PTSD at any age. A number of factors can increase the chance that someone will have PTSD, many of which are not under that person’s control. For example, having a very intense or long-lasting traumatic event or getting injured during the event can make… Continue reading

The Silent Assailant by Julie Zielinski

Recently, we were in Washington D.C. attending a banquet called Honoring the Service of Law Enforcement Officers Who Died by Suicide. This first time banquet was held in conjunction with National Police Week and was sponsored by BLUE H.E.L.P. Its purpose was to honor and recognize the service of offices who made that fateful decision and their survivors. It is Blue HELP’s mission to put names and faces to the men and women of Law Enforcement whose emotional injuries become too much to bear. Although the number of Law Enforcement personnel who take their own lives typically exceeds… Continue reading

EDITORS NOTE: This time of year can be tough for cops and other emergency responders just like everyone in society. It’s hard to think about suicides, but maybe this is the best time for us to look after our health as well as that of our peers. Julie Zielinski is a Law Enforcement Survival Institute faculty member who lost her Sheriff’s Deputy son to a completed suicide. Julie now writes and teaches about suicide prevention for law enforcement professionals. As the new edition of her book Matt’s Last Call: Surviving Our Protectors is released she reflects upon her journey. Read to the end of the article to find our free CopsAlive suicide prevention resources that you can activate in your agency TODAY!

On June 1, 2005, my 27 year old son, Matthew Zielinski, took his life due to a failed relationship. At the time he was a Chelan County Sheriff Deputy in Washington State, who had achieved this dream job eleven months earlier. Obviously, it was devastating to my family and I but more about my journey later.

It is essential that… Continue reading

One way to start to do that is to discover what your most important beliefs are as a law enforcement professional. One such statement of belief is the personal credo.

I’ve always liked the credo expressed by John Wayne’s character in the movie The Shootist: “I will not be wronged, I will not be insulted and I will not be laid a hand upon. I don’t do these things to others and I require the same from them.”

That credo says more about what he won’t tolerate rather than what he believes in, but it is all food for thought as you decide what you believe in.

To Protect and To Serve

You may recognize this motto that has in it’s simplicity been adopted by most of the law enforcement personnel around the world but it has it’s roots with the Los Angeles Police Department here in the United States. This famous motto was the winning entry submitted by Officer Joseph S. Dorobeck for a contest held by LAPD as published in their internal BEAT magazine in February 1955.

“To Protect and to Serve” became the official motto of the LAPD Police Academy, and it was kept constantly before the officers in training as the aim and purpose of their profession. With the passing of time, the motto received wider exposure and acceptance throughout the department. Today that agency motto is recognized, and has been adopted, by many agencies around the world. Source: http://www.lapdonline.org/history_of_the_lapd/content_basic_view/1128 Web accessed 5-12-14.

THE CREDO PROJECT is a special educational initiative of the Police Chaplain Project dedicated to unlocking the power of CREDO in daily life.

Over the past year, Rabbi Cary Friedman (author of Spiritual Survival for Law Enforcement) and Phillip LeConte, co-founder of the Police Chaplain Project, have sought out members of the law enforcement community who… Continue reading

EDITORS NOTE: The following article was submitted by Carolyn Whiting co-author of the new book: The Crazy Lives of Police Wives. This is a book written for and by police wives.  Please support them!

You can’t fix it if you don’t know it’s broken. That goes for people as well as machines. PTSD, suicide, alcoholism and domestic violence are all indicators of broken/hurt people that may go unrecognized. How can you fix the person who is hurting if he can’t be reached or he doesn’t understand that he needs help? There are too many stories about yet another police officer killing himself or another police family battling alcoholism behind the closed doors of their home, in secrecy and shame. It doesn’t have to be that way. Think of the lives that might be changed if only these hurting families knew about the myriad of resources available and the many groups with knowledge and experience waiting in the wings, eager to help. The Crazy Lives of Police Wives is a new book written for and by police wives that broaches these painful… Continue reading

I think its time we created a new credo for law enforcement. My suggestion based upon my strong beliefs about officer safety and wellness is: “Work H.A.R.D.; Live H.A.R.D.; Die H.A.R.D.”.

I think the key to a good motto or credo is the deeper meaning that we take out of it that gives us guidance when we need it. In this case I have defined the acronym of H.A.R.D. as:
H = Healthy
A = Altruistic
R = Resilient
D= Dedicated

I recently had a chance to interview Julie Zielinski about her new book entitled: “Matt’s Last Call: Surviving Our Protectors”. Julie wrote the book after her son, a sheriff’s deputy in Washington state, took his own life. As Julie reflects on the death of her firstborn son, she informs parents and children of the dangers of suicide, the difficulty of coping, the pain of everyday life, and lastly the days that happiness returns, even if just a little bit.

Matt Zielinski was an athlete, a U.S. Marine Corp. Sergeant, and ultimately fulfilled his dream of becoming a law enforcement officer. Matt worked for the Chelan County Sheriff’s Office in Wenatchee, Washington. He loved his work and was due to be appointed to the SWAT Team because… Continue reading

LAPD SWAT Officer Randal Simmons was killed in the line of duty during a SWAT operation on February 7, 2008.

Now NRALifeofDuty.tv (presented by Brownells) has created a film about his beliefs and work as a man, and LAPD Officer. The program is entitled “Protect & Serve” and you can watch the trailer below. (A link to the full feature is at the bottom of this article)

Police Officer Simmons was shot and killed while entering the residence of a murder suspect. The suspect had called police and stated that he had shot three of his family members. The department’s SWAT team responded to the call and Officer Simmons and Officer James Veenstra were the first officers… Continue reading

What are you going to do after your law enforcement career ends? Are you planning now for what you will do? We do not have complete control about how our careers will progress and what will happen to us on the job. There are many pitfalls that can derail even a successful career in law enforcement.

None of us can predict how long our career in police work or law enforcement will last, but we can create a strategy for how we want our careers to progress and when we want to leave the job. We can plan for what we will do after we leave the job for another career, or how we will live and what we will do, with our time in retirement.

I recently had a chance to speak with one such former police officer who had a plan and who is now helping others in law enforcement and elsewhere plan for their futures in many ways. His name is Brian Deegan, and he created a plan for his success while he was working as a cop and now helps others create their plans. Continue reading

Many Law Enforcement Officer’s have commitments that we must meet in our daily lives. Work and family commitments are just starters. Add in some O.T., court appearances, private duty details or a second job. Then some of us factor in our extra community service commitments to our home- town or church, our kid’s sports program or school activities and some of us have been elected to public office. Some of us have a commitment to serve on our unions, F.O.P. or collective bargaining teams.

Once again, I have come to realize that some of us just over-commit. Our mind tells us that we can take on another task and then we become over-extended. Unfortunately, this activity interferes with… Continue reading