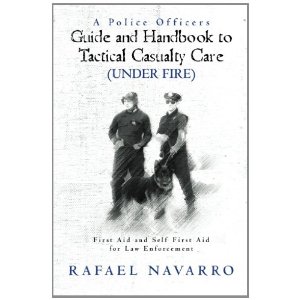 After returning from his overseas tour, Rafael was given an assignment within the training unit at his agency. It didn’t take long before he realized that there were some shortfalls to the First Aid and Self First Aid program they were offering.

The most outstanding concern was the lack of training concerning the use and deployment of a tourniquet.  After taking a good look at their existing program, he proposed a lesson plan, which included the purpose and use of the tourniquet. This was approved after a short review and the trend began. Slowly, he was able to affect the entire agency, by exposing them to tourniquet training.

This is when he realized the enormous communication gap between our military and law enforcement agencies. Rafael began a personal campaign to bring attention to the fact that our soldiers (young as they may be) are considered trainable in combat lifesaving skills by our government, whereas most of the law enforcement agencies in our country consider this type of training “out of the realm or scope” and perhaps too difficult.

The fact of the matter is, that the skills needed to become proficient in combat lifesaving skills can be taught to police… Continue reading