I first read about John Goddard when I read the original edition of Chicken Soup for the Soul several years ago.  At age 15 John set 127 goals he wanted to accomplish during his lifetime.  He wanted to accomplish great things and he wanted do lots of amazing stuff during his lifetime.  Now many years later he has done most of them and shares his experiences with others.  His list included things like exploring all the major rivers of the world and climbing the Matterhorn.  He rode elephants and camels, flew in jet fighters and lit a match with a .22 rifle.  He wanted to read the complete works of Shakespeare, Plato, Aristotle, Dickens, Thoreau to name a few and he was able to publish an article of his own in National Geographic.  He retraced the route of Marco Polo through all of the Middle East, Asia and China, and dove in a submarine.  Business World News called him the Real Indiana Jones CLICK HERE to read more.  I loved the story so much that I used to read it to my scout troop when I was a Scoutmaster and I would challenge all of them to write their own life list.  Do you have a Life List?  is it in writing?

What makes John different than most of us is that he actually sat down and wrote out a list that he carried with him as he got older and checked off the accomplishments as he lived them.  There have certainly been lots of claims and psychological studies about the effectiveness of setting goals and they almost all say to WRITE THEM DOWN.

Here’s a video about John:

As a cop have you written out your life goals?  Do you have a life list?  CLICK HERE and you can read John Goddard’s Life List  and maybe it will get you to start to dream and create a list of your own.

What do you want to see, have, be and do in your lifetime?  Start small.  Police officers should make a list of all the things you want to see, do, be and have within the next six months.  Make another list for the same goals spread over a year.  If you are feeling really brave set goals for your lifetime just as John Goddard did.  I know that if you asked John, he would say that of all the things he did, one of the best ones was making the list in the first place.

You can order John’s book on Amazon.com by CLICKING HERE 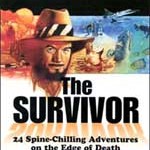 John Marx was a Police Officer for twenty-three years and served as a Hostage Negotiator for nineteen of those years. He worked as a patrol officer, media liaison officer, crime prevention officer and burglary detective. Also during his career he served as administrator of his city's Community Oriented Governance initiative through the police department's Community Policing project. Today John combines his skills to consult with businesses about improving both their security and their customer service programs. John retired from law enforcement in 2002. When one of his friends, also a former police officer, committed suicide at age 38, John was devastated and began researching the problems that stress creates for police officers. He decided he needed to do something to help change those problems and he wanted to give something back to the profession that gave him so much. He started a project that has evolved into CopsAlive.com. Put simply, the mission of CopsAlive is to save the lives of those who save lives! CopsAlive.com gathers information, strategies and tools to help law enforcement professionals plan for happy, healthy and successful careers, relationships and lives.
View all posts by Editor →
Tagged  cop, copsalive, John Goddard, life list, plan your life list, police officers.
Bookmark the permalink.