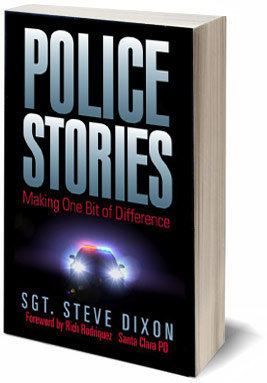 Did anyone ever tell you that despite all of your hard work in law enforcement that nothing you did would make one bit of difference?  Well that’s what one officer told a young Steve Dixon at the beginning of his police career but he didn’t believe it, and spent the next 36 years proving he could make a difference.

Steve had a long and varied career starting with 5 years in the Military Police.  Then after he got out of the Army he spent 11 years working for the Santa Clara Police Department in California, and he finished his career working for the San Jose Police Department in California for over 20 years.  He retired in 2008 as a Sergeant from San Jose PD.

Now that he is retired, Steve has written a book to prove that he did make One Bit of Difference, and with the book he is motivating all the rest of us to examine our career and for us to make a difference in our careers as well.

In “Police Stories: Making One Bit of Difference” Retired Sergeant Steve Dixon offers us a collection of stories and anecdotes from his career about the good and bad of police work.  The book, while written for cops, is not just for people in law enforcement and tells things like Steve saw them over 36 years as a cop.  Steve doesn’t pull all of his punches either, as he talks candidly about lazy cops and poor leadership in law enforcement.

Steve tells stories of shootings and high speed chases, of dangerous criminals and ineffective cops.  He describes a situation where he was holding a very dangerous suspect at gun point after calling for backup and then noticing that he wasn’t hearing any sirens coming to his aid.  He also describes the chaos of a robbery, homicide scene and the sometimes humorous activity from the many law enforcement agencies that responded.  He also explains a situation where he was in a standoff with two armed suspects, across the hood of a car after a high speed chase,… Continue reading