What’s the Point of All This Work as a Cop? 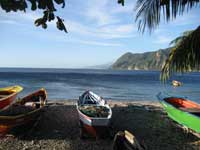 If you’ve followed my writings for a while, you may have noticed my slant on financial planning for police officers is less about money and more about a rewarding and satisfying life.  Money is a necessary part of life, but not the purpose of it.  Sometimes as cops, we get so focused on earning money, that we forget what that money is for.

Here is a tale that always brings me back to reality when it’s easy to miss the forest for the trees.   I’ve seen this many places so I don’t know who credit as the original author.

“It had been almost two years since the American businessman, with an MBA from a prestigious Ivy League school, took a vacation.  He had a very important role as a business advisor at… a Fortune 500 consulting firm.  While vacationing in Mexico, he met a Mexican fisherman with a small boat who’d just caught a lot of fish.  Impressed by the Mexican’s catch, the American began talking with him.

It was only 2:00 in the afternoon, so the American asked the man why he was coming in from fishing so early.  The Mexican said he had enough fish for his family and friends and had no need for more.  He continued by saying he wanted time to take a siesta, play with the kids, and have his neighbors over for dinner and dance.

The businessman proudly told the Mexican that if he worked longer he could form a corporation, buy more and larger boats and expand the company by exporting fish out of Mexico.  He continued by saying that after about 20 years the company would be large enough to sell for millions of dollars.

The Mexican was impressed by this idea and asked what he would do next.  The American said “that’s when all the hard work will pay off.”  He could sell the company, retire and live on the beach, spend his time doing a little fishing, playing with the kids, and enjoying dinner and dance with friends.”

What do you think?  Does this make you reconsider what you are doing in your work as a police officer and why you are doing it?  I think it serves as a great reminder to all of us in law enforcement, every time I read it, that maybe we should focus on the real goals in our lives and we can get there with proper financial planning and the right goals.

I invite you to find out more by visiting http://www.cjrylantwealthmanagement.com and download the FREE workbook, 7 secrets to Financial Independence.

Chuck Rylant is a retired police officer and regular contributor to CopsAlive.com. He owns his own financial planning business and built it while he was still working in law enforcement. Prior to that Chuck had been a full time California Police Officer for 15 years. He has worked as a detective, patrol officer, field training officer and SWAT team member. He also served his department by volunteering as a Police Officer Association Board member. Chuck is also an active member of the Santa Maria Police Council which is a non-profit community organization developed to raise money specifically for the police department. Chuck is the owner of C. J. Rylant Wealth Management. His firm provides personal fee only financial planning and specializes in providing objective advice to police officers. His clients have discovered how to worry less about money and enjoy life more. Chuck can be reached on his website at: http://www.chuckrylant.com. Here's a link to an interesting video from Chuck about Mutual Fund Fees: http://www.youtube.com/watch?v=NLm6ngyLnw8
View all posts by Chuck Rylant →
Tagged  c. j. rylant, chuck rylant, cjrylantwealthmanagement.com, cops, copsalive, copsalive.com, financial independence, financial planning, financial planning for police officers, law enforcement, police, police officers.
Bookmark the permalink.