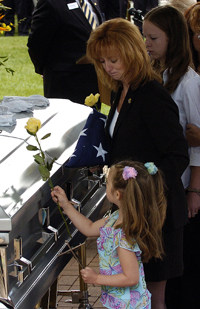 Join CopsAlive next Thursday July 30th for a live interview with Kelly Young widow of slain Denver Police Detective Donald “Donnie” Young (E.O.W. May 8, 2005).  Detective Young was killed in the early morning hours on Mother’s Day 2005 while working off duty in uniform at a private baptismal celebration.  Young and his partner had asked some young men who were trying to crash the invitation only event to leave, and they became combative, so they were escorted out by Detective Young.  A short time later one of the men came back to the party with a gun and shot both police officers from behind.  Young was shot twice in the back and once in the head and was killed while his partner, Detective John “Jack” Bishop was wounded but saved by his bulletproof vest.  The suspect 19 year old Raul Garcia-Gomez fled the United States to Mexico and was involved in a lengthy court battle… to get him returned to the U.S. for trial.  He was returned and stood trial and was convicted of the Second Degree Murder of Detective Young and First Degree Attempted Murder of Detective Bishop.  He is now serving an 80 year sentence in prison.

In order to get Garcia-Gomez extradited to the U.S. an agreement had to be reached between the U.S. and Mexico that the suspect would not be subjected to the death penalty.  As a result of this case, Colorado Representative Bob Beauprez introduced legislation before the United States House to cut foreign aid to countries that refused to extradite people suspected of murdering American law enforcement agents. The provision was part of a 2006 foreign aid bill signed into law by President Bush in November 2005.

At the time of her husbands death Kelly had been working in the insurance industry for 14 years.  Once her husband was gone, she said that her work was no longer important to her.  She told CopsAlive:

“I felt I needed to be in a job that had more purpose.  I am now the Vice President of Colorado Concerns of Police Survivors.  Helping other survivors get through this process has given my life purpose.  My husband provided me with a strength I never thought I had and hopefully I can share that with others.  I have two beautiful daughters, one is 18 and will begin her first year at CU Boulder.  My other daughter is 9 and is involved in competitive gymnastics.  I consider myself very lucky.”

We will be lucky indeed to have a chance to hear from Kelly about her experiences as a police officer’s wife and what she went through following his death.

Join CopsAlive on Thursday July 30, 2009 at 2 PM Mountain Time to listen in live to this interview.

review news coverage of the death of Detective Young by CLICKING HERE
or visiting: http://www.thedenverchannel.com/news/4485183/detail.html

John Marx was a Police Officer for twenty-three years and served as a Hostage Negotiator for nineteen of those years. He worked as a patrol officer, media liaison officer, crime prevention officer and burglary detective. Also during his career he served as administrator of his city's Community Oriented Governance initiative through the police department's Community Policing project. Today John combines his skills to consult with businesses about improving both their security and their customer service programs. John retired from law enforcement in 2002. When one of his friends, also a former police officer, committed suicide at age 38, John was devastated and began researching the problems that stress creates for police officers. He decided he needed to do something to help change those problems and he wanted to give something back to the profession that gave him so much. He started a project that has evolved into CopsAlive.com. Put simply, the mission of CopsAlive is to save the lives of those who save lives! CopsAlive.com gathers information, strategies and tools to help law enforcement professionals plan for happy, healthy and successful careers, relationships and lives.
View all posts by Editor →
Tagged  Concerns of Police Survivors, cops, copsalive, copsalive.com, donnie young, eow, interview with widow of slain officer, kelly young, line of duty death, police, police survivors, police widow, siain in the line of duty.
Bookmark the permalink.