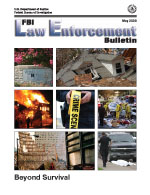 I had the privilege to attend an excellent seminar last week hosted by the Denver Police Department on “Spirituality, Wellness & Vitality Issues in Law Enforcement Practices”.  Our presenters were FBI Supervisory Special Agent Samuel L. Feemster, J.D. and Sergeant Ginger L. Charles, Ph.D. of the Arvada Police Department.  They asked some interesting questions and offered some unique perspectives on modern law enforcement practices.  Some examples include: “Is Law Enforcement a calling for you?” and “What courses were you trained in at the police academy?”, then  “What courses should you have been trained in at the academy?”

This seminar was not about just religion but about any spiritual influence that gives police officers the kind of character that allows them to endure the toxic nature of police work and maintain their sanity over the years of a demanding police career.  There was information presented that many, many more officers die from suicide, cancer and heart attacks than ever are killed in the line of duty and we discussed what leads police officers, true leaders of our communities, to chose suicide over life.

The question was asked how do you become a well rounded police officer?

They led an excellent discussion on… the Dimensions of Intelligence and social adjustment as well as a cop’s ability to interact with a broad range of people in our society.  We examined the concepts of Cognitive Intelligence (IQ), Emotional Intelligence (EQ), Social Intelligence (SI) both descriptions coined by Daniel Goleman the social psychologist as well as Spiritual Intelligence (SQ).  It was noted that outstanding performers in policing develop themselves in all of these dimensions.

Dr Charles discussed her research study on “Resilience” in police officers and how that interacts with spiritual beliefs.  She found that most police officers are remarkably resilient and even the ones who show signs of Post Traumatic Stress Disorder (PTSD) are able to cope with the horrible things their jobs involve them in, and are able to work thru the impact of that stress, better than many other people.  She described one police officer she found that has been on the job for 61 years and is 88 years old and loves the job.

She also briefly described her High Risk Model of Threat Perception Study (HRMTP) which examined several interesting factors that might make cops either better at the job or more vulnerable to the negative effects of stress such as behavioral traits that might predispose officers to certain behaviors that may help them in the job or hurt them.  There are also triggers of certain behaviors from our personalities and even buffers in our lives that protect us from certain kinds of stress.

All in all there was much more information than we could all digest but lot’s of references for us all to learn more and begin developing a plan for our overall wellness as police officers.  We can start by asking ourselves the important questions that might ultimately save our lives like: “How do we succeed in law enforcement?” and “What does it take to survive a career in law enforcement and not become a wounded warrior?”.

Here are some resource articles for you that reference the works of SSA Feemster and Dr. Charles.

“Wellness and Spirituality: Beyond Survival Practices
for Wounded Warriors” By Samuel L. Feemster
and
“A Brief Introduction to the Language of Spirit and Law Enforcement” By Jeffrey G. Willetts, Ph.D.
and
“On the Edge: Integrating Spirituality into Law Enforcement” By Inez Tuck, Ph.D., M.B.A., M.Div.
“How Spirituality Is Incorporated in Police Work: A Qualitative Study” By Ginger Charles, Ph.D.
and
“Brain Functioning as the Ground for Spiritual Experiences and Ethical Behavior” By Fred Travis
http://www.fbi.gov/publications/leb/2009/may2009.pdf

John Marx was a Police Officer for twenty-three years and served as a Hostage Negotiator for nineteen of those years. He worked as a patrol officer, media liaison officer, crime prevention officer and burglary detective. Also during his career he served as administrator of his city's Community Oriented Governance initiative through the police department's Community Policing project. Today John combines his skills to consult with businesses about improving both their security and their customer service programs. John retired from law enforcement in 2002. When one of his friends, also a former police officer, committed suicide at age 38, John was devastated and began researching the problems that stress creates for police officers. He decided he needed to do something to help change those problems and he wanted to give something back to the profession that gave him so much. He started a project that has evolved into CopsAlive.com. Put simply, the mission of CopsAlive is to save the lives of those who save lives! CopsAlive.com gathers information, strategies and tools to help law enforcement professionals plan for happy, healthy and successful careers, relationships and lives.
View all posts by Editor →
Tagged  cancer, career in law enforcement, character, cops, ethics, high risk, law enforcement, line of duty, police, police academy, police officer, police stress, police work, ptsd, religion, research, spirituality, spirituality in law enforcement, stress, suicide, wellness, wounded warriors.
Bookmark the permalink.